Thermal imaging technology has been utilised for a variety of animal surveys across Australia. Species of interest have included pigs, goats, horses, rabbits, rabbit warrens, kangaroos as well as new and emerging populations of deer. Thermal imagers provide an opportunity to detect more animals than are usually seen with traditional visual surveys, which allows for the application of more robust statistical analysis tools and greater confidence in abundance and density estimations. 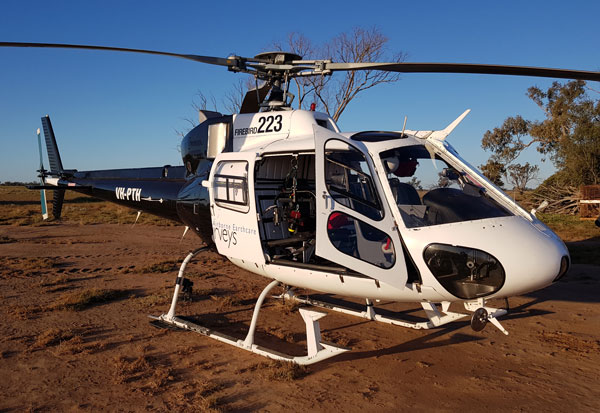 Heli Surveys has invested significantly to position ourselves as the leaders in this field through:

In addition to our equipment and our experienced team, it is our working relationship with researchers that puts us ahead of the rest. Our ongoing participation and collaboration in understanding and improving the use of thermal imaging technologies for the field of wildlife management has further broadened our capabilities in scientific methodologies and survey design.

The thermal imager Heli Surveys owns and operates is a military grade, long-wave uncooled imager. It is full HD (1920 x 1200 resolution) and records at 60 frames per second. This is currently the only full HD, and the highest, resolution imager in Australasia. With this resolution, lens and extremely high frame rate, we are able to capture a large Field Of View (FOV) and still maintain enough definition and clarity to easily identify the species of a target. 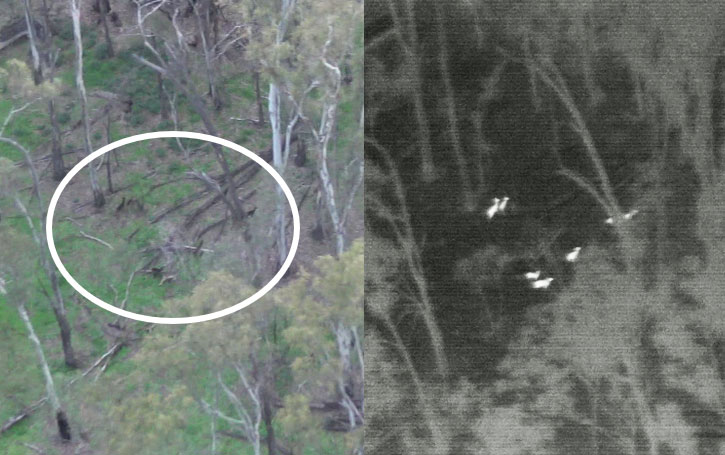 Heli Surveys mounts our imager on a 3-axis, gyro-stabilised gimbal that is hung from a custom made, CASA approved mounting-points. The gimbal removes all vibrations and gives us a clear, stable and consistent video. The gimbal’s end points and settings are set such that any heading, yaw and pitch changes do not affect the imager's orientation or the footprint on the ground that is captured. This is vital to ensure a consistent area is surveyed and therefore the results are as robust and accurate as possible.

In addition to surveying from a helicopter, Heli Surveys can also perform thermal surveys from its UAV. This means we can capture full HD thermal video from a UAV in situations where helicopters are not suitable e.g. urban areas and reserves. 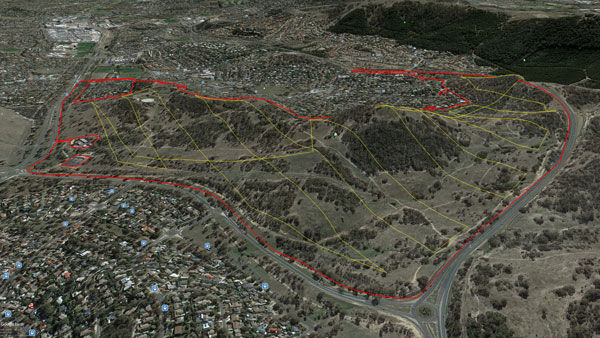 Another advantage of UAVs is their ability to fly at night. Solar reflectance has the biggest impact on the quality of the thermal imagery and the ability to differentiate a hot target against a false positive i.e. hot rocks, bodies of water. By removing the solar radiation completely and flying at night, extremely high quality imagery and data can be collected.

The key difference between Heli Surveys and other UAV operators is the ability to use our full HD thermal imager (1920 x 1200 resolution) on our UAV. This has 7.5 times the number of pixels and 6.6 times the frame rate than a standard 640 array camera found on all other UAVs in Australasia.

Examples of surveys we have conducted at night using our UAV include:

Complementing aerial shooting with thermal technology has become commonplace and widely accepted around the world. For eradication programs, many agencies and companies no longer aerially shoot without a high resolution thermal imager on-board. The advantage and increased chance of an eradication program being successful with the aid of thermal technology, cannot be overstated. Programs such as the Auckland Islands “Pest Free” project, Five Fingers Peninsula deer eradication and the Pig tuberculosis detection project have all been aided by the use of thermal imagers.

Heli Surveys have been directly involved with thermally assisted aerial shooting projects and have helped train and educate pilots, shooters and camera operators to increase efficiency, efficacy and the humane eradication of invasive species.

Not only is this a quick and efficient way to detect and cull single animals but groups that split up can be found again quickly and easily by using the thermal imager. The percentage of escapees dramatically drops when using this technology. Even animals that “freeze” and are traditionally missed in conventional shooting operations, can be detected with thermal assistance.

For more information on Heli Surveys thermal capabilities, please contact us. A full information package and presentation can be provided on request.